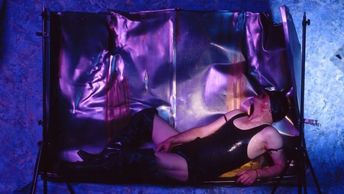 From Radio National website....
"If Sydney ever had a superhero maybe it was Trough Man. The legend goes that this character would lie down in the male urinals at dance parties in the 1980s and enjoy a long golden shower.
Sydney's gay party scene at the time saw an explosion of creative music, fashion and sexual activity. At events like The Mardi Gras, Sleaze Ball and the RAT parties rules didn't apply.
Decades later producer Greg Appel goes deep into Sydney's gay history in search of Trough Man. Was he still alive? Why did he want to lie in the trough?"

A big thank you to Radio National for the use of this file, Greg Appel for the interview and Garrie Maguirre for the image.
The following audio recording was broadcast on Radio National at 11am on Tuesday May 9th 2017
​*Please be advised that this programme contains adult content and drug references*